Acute anterior uveitis causes pain, redness and loss of vision due to inflammation in the anterior part of the eye.

Acute anterior uveitis is associated with the inflammatory diseases collectively known as the seronegative spondyloarthropathies (SpA). These arthritic conditions are collectively linked to carriage of the HLA-B27 gene. 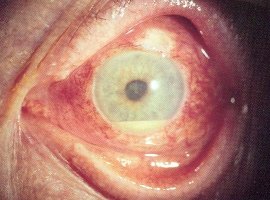 Isolated AAU without arthritis is relatively common. It is also commonly linked to the HLA-B27 gene

Given the importance of enthesitis in the seronegative spondyloarthropathies (SpA) and the clinical and immunological gene overlaps between SpA and AAU then a role for the enthesis in eye disease is suspected.

The anterior part of the eye termed the anterior chamber has the most remarkable micro-enthesis machinery in the whole of the biological world. Small muscles and their entheses control both of the following

The following key observations point towards the importance of micro-machine enthesopathy in AAU:

AAU is often short lived and flips from one eye to the other. This suggests that something intrinsic to the eye rather than outside factors such as the immune system are driving the inflammation.

When the insertions in the lower limbs of patients with AAU were scanned using ultrasound, subtle enthesis changes were noted pointing towards fact that AAU was part of a generalised or "systemic" enthesopathy problem.

Micro-inflammation is common at normal entheses throughout the skeleton. It is noteworthy that the anterior part of the eye has a unique type of immune response to dampen inflammatory reactions and is called anterior chamber associated immune deviation (ACAID). The micro-enthesis theory of AAU now offers an novel explanation for this phenomenon, that is, the immune system prevents inflammatory reactions at sites of microscopic damage.

Finally one of the drugs used to treat AAU, atropine, temporarily paralyses the small muscles of the eye. This may in part be working by resting the insertions.

As of 2012 the micro-enthesis theory of AAU is still much less favoured than the classical autoimmunity theory where the problem has been conceived in relationship to the immune system rather than the micro-entheses of the eye.

This micro-machine enthesitis is difficult to prove directly in humans but represtents a modern concept for understanding why patients get anterior uveitis.

Key Points to watch check in patients with Uveitis