Dactylitis is diffuse inflammation or sausage like swelling of either a finger or toe. It may simultaneously involve more than one digit [1]

It is derived from the Greek word dactylos which means finger.

Sometimes dactylitis is painless which is termed "cold dactylitis".

It is a characteristic feature of Psoriatic Arthritis and occurs in about a third of cases.

Some authors regard it as a marker of disease severity [2]

The feet are most often affected and should always be checked since dactylitis may be painless. 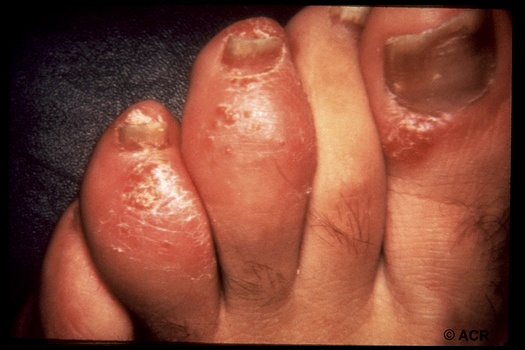 On scanning of the dactylitic joint the following features are seen:

Link between Dactylitis and Enthesitis

This is still a controversial topic but there is good evidence for common mechanisms between dactylitis and enthesitis in Psoriatic Arthritis.

Patients with dactylitis may have clinical evidence of enthesitis elsewhere.

Patients with dactylitis may have nail disease which is linked to enthesitis.

Patients with dactylitis may have x-ray evidence of enthesitis on x-ray in the same finger or elsewhere.

The proposed link between dactylitis and the enthesis is shown below.

On high resolution Magnetic resonance imaging it is possible to see enthesitis of insertions or inflammation at sites of tendon pressure over bone at a site termed the functional enthesis.

Other causes of Dactylitis

This section focuses on the treatment of dactylitis associated with Psoriatic Arthritis.

Local steroid injections may be effective.

Conventional disease modifying drugs such a Methotrexate may be used but their effectiveness is still not completely proven. Our feeling is that they are effective for dactylitis except for the "cold dactylitis" variant.

The anti-TNF class of drugs are effective.

The anti-IL-17 monoclonal antibodies are effective

Of note these therapies are generally used for cases with active Psoriatic Arthritis that includes other changes in addition to dactylitis.

Dactylitis may rarely occur in Reactive Arthritis and can also be seen in Undifferentiated Spondyloarthropathy.

If seen in a patient with a diagnosis of Ankylosing Spondylitis then the case probably has an overlap disease with Psoriatic Arthritis.

Occasionally diffuse swelling of an arm or leg can lead to what is termed limb dactylitis and is a recognised feature of the seronegative spondyloarthropathies.