Does Nail Related enthesopathy play a role in pincer nails?

The outside of the nail was thought to be anchored to the skin.

Surgical dissection work and recent tissue histology studies have shown that the outside of the nail (lateral nail) is actually anchored to the ligament attachment sites.

How disorders of lateral tethering might cause nail problems 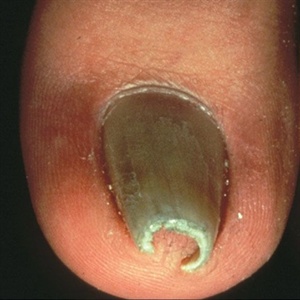 Excessive curvature of the nail plate may lead to the nail developing a dome like curvature.

This gives an appearance of the nail being pinched, or so called pincer nails.

A pincer nail, also called a trumpet nail, is a type of an ingrown nail which can be quite painful.

It can occur after entities such as fungal infections. It most typically afflicts the big toes.

It may require surgical treatment including complete removal of the nail to prevent recurrence.

The cause of pincer nails is poorly understood. We believe that a dysfunction in the integration of the nail with the collateral ligament enthesis may play a significant role in this condition.